Construction of the Collegial Church of Neuchâtel began in around 1185 and was consecrated in 1276 and the church shows the evolution from the Romanesque style to the Gothic style and art forms. The Apses, Choir and and lower walls of the Nave date from the Romanesque period while the lantern tower and three aisled nave and the typically Gothic pointed arches all date from the Gothic period of construction. The current western façade and north tower date from the restoration of the Collegial Church which took place between 1867 and 1870 when three Gothic chapels were removed.

The Collegial Church is home to the Monument of the Counts in the northern arch of the Choir. The monument dates from 1372 and survived the 1530 reformation in Neuchâtel As a tomb for the counts and countesses of Neuchâtel, it appears that the tomb was not seen as a relevance for the Reformation itself or too important to the citizens of Neuchâtel as Neuchâtelois. While the countess Jehanne de Hochberg remained faithful to Rome, the Collegial Church was given over to the city of Neuchâtel and she used a chapel in the Castle. 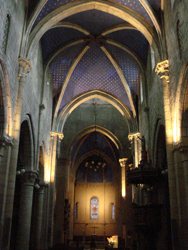 The Choir of the Collegial Church is in the Romanesque style with blind arcades, columns, capitals and animals scupted into the base of the columns and the main apse is flanked by two smaller secondary apses on either side. The ogival arches show the transition to from the Romanesque style to the Gothic and is reminiscent of the cathedrals in Basel and Lausanne .

Berthold, one of the sons of the Count of Neuchâtel, had been canon at the Baseler Münster and is credited with with bringing some of the ideas from Basel to Neuchâtel In 1212, Berthold became the bishop of Lausanne where the current cathedral was being built. It appears that the there was also learning from Lausanne - as the ribbing becomes sexpartite while the others are quadripartite intersections.

At this time, under the leadership of Guillaum Farel depicted in the statue in the square brandishing the scriptures, Neuchâtel entered the reformation. On the 23rd October 1530, townspeople returning from Geneva entered the Collegial Church and emptied it of furnishings. On the south wall of the choir, an inscription, thought to date from the 17th century commemorates the reformation - "1530 XXIII doctobre fut ostée et abbatue lidolatrie de ceans par les bourgeois" - In 1530, 23rd October, the idolatry of this house was removed and destroyed by the townspeople. A tablet on the northern wall of the nave commerates the preaching of Guillaume Farel and was installed in 1830.

The stained glasses of the apses dates from 1905 and are by the artist Clement Heaton who tried to recreate the effects in Chartres Cathedral. The main apse shows Christ giving blessings while the others depict patterns of vine stocks where birds are singing.

The current cieling decoration - stars on a blue background - dates from 1870. The pulpits balustrade was also restored in 1870. The old organ in the northern transept was made by EF Walker de Ludwigsburg (Wurtenberg) and dates from 1870. The new organ dates from 1996 and were manufactured in Chézard-Saint-Martin in Canton Neuchâtel.

A niche in the southern wall shows a picture from the Gothic period - the figure is Henri Fabbri, a donor to the church. The word "Nostris" is visible on his banner.

The rose window represents the four evangalists around the Alpha and Omega was is the work of Théodore Delachaux in 1936. 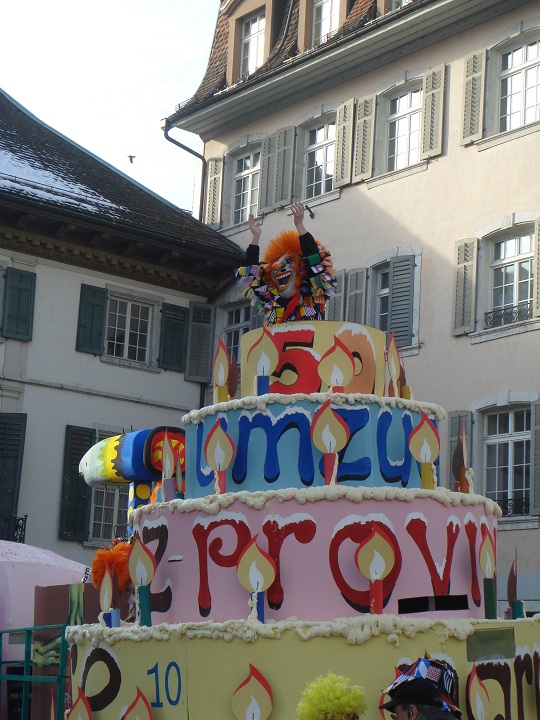 Waggis in the cake at the cortege at Solothurner Fasnacht 2010