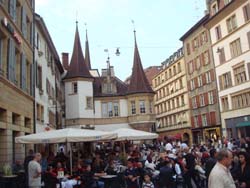 We spent this weekend down in Neuchâtel for two days of the three day Fêtes des Vendanges - the annual Wine Growers festival. A selection of last years wine from the region of Neuchâtel provides ample excuse for what amounts to a street party in the "toy town made out of butter."

We met our colleagues at the usual tented bar on the corner of the Rue du l'Hôpital and Rue des Terreaux at the gym late afternoon to tuck into some most fine Neuchâtelois Pinot Noir red wine. Most fine - and a superior option to the Rosé which we found later.

Some wine and a quick scout later an "Irish" music quartet was revealed in the tent opposite - although underamplified and Breton (i.e Gaelic rather than specifically Irish) - we tucked into some rather enjoyable Chasselas from nearby Cressier. Music is an integral part of the Fêtes and there's numerous Guggenmusik groups pottering around the city touting their catchy tunes. 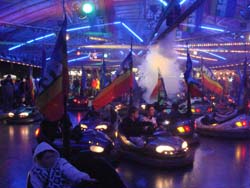 Actually, an excellent interlude before firmly tucking in to a bout of the Bumper Cars - a marvellous display of fun driving. I tell you one thing - they're a whole lot more aggressive than the bunch at Knabenschiessen in Zürich - where it seems to be a badge of honour to avoid as many cars as possible. Not here! This is French-speaking Switzerland - where men are men and dodgem drivers have been busy on local wine.

Our dinner at the Trattoria du Soleil (place des Halles 11, 2000 Neuchâtel) was somewhat ill-timed - as we asked for the bill, the fireworks outside commenced. Our waiter decided it was better to watch the fireworks than collect our money. Oddly, we agreed. And peered out the window at the fireworks. Which, as it turned out, wasn't a bad idea at all. We had a clear view of the fireworks above the thronged mass below our first floor window. Which was sweet. 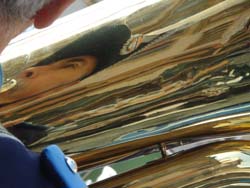 Back out on the streets, the mood remained convivial and upbeat. The pace had heated up since the afternoon - with the kids home and singles out - it seemed this year that many of the people out were younger than in previous years. Either that or we'd got older. Both, of course, could be true.

Some (local) wine later, we headed back to the fun fayre for more rides on the dogems. I'm not usually one to encourage drink-driving but drink-dodgems is fun and about as safe as drink driving gets.

Recovered and breakfasted on Sunday, we wandered around town taking in some of the atmosphere - almost village-like in its Sunday-slow Swiss-Gallicness. Lunch at the Hotel Beau Rivage , on the banks of Lake Neuchâtel proved an even slower, relaxing way to wile away a few hours of the afternoon whilst basking in the sun.

Pottering around the various stalls purveying their assorted wares - we stopped for occasional bottle of local plonk from one of the many stands run by the various local clubs.