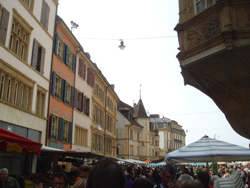 From the station, we strolled into the relaxing and convivial old town of Neuchâtel and almost as quickly stumbled accross the market at Place des Halles. A veritable plethora of local producers of foods and goodies were out in force and so were the locals. Fresh fruit and vegetables abound. And a baker with a fine assortmet of different types of clearly popular breads. We picked up a loaf - a fruit bread with raisins. OK, so tt just looked good and the place was popular with the local people there and abouts - so it has to be good right? (Update: actually it was excellent. It had the lightness of a sponge but in bread format and texture. Slight lemony colour on the interior with a decent sized crust and a good number of raisins. Definate lack of sugar which seems to overwhelm many mainstream fruit breads.)

The old town, yellow sandstone coloured, has a relaxing charm about it. It's almost a French provincial feel with plenty of coffee houses and eateries spilling out onto the street. The market also did what the Strasbourg Christmas Market failed to do last year and actually offered a decent selection of locally produced foods and local produce rather than touristic cr*p. The Alsatians would do well to learn fron Neuchâtel 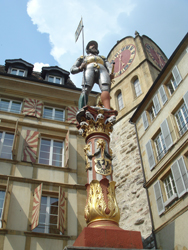 So after a good rummage around the market, we headed for luncheon at the Restaurant le Banneret (rue Fleury 1) in a 17th Century building in the centre of the old town. In the comfortable 1st floor, I took the Taglierini with tomatoes and basil which was freshly prepared and really quite enjoyable. M'learned colleaque indulged of the ravioli stuffed with spinach. Which, if I'm honest, was better than the Taglierini. Both were good - just one was better. The multi-lingual service (French, Italian, and English were all spoken) was excellent. The next time I'm in Neuchâtel , I'll be trying the le Banneret - especially as it's run by a pair of Italians who obviously know how to cook and do so!

After lunch we took the steepish walk up the rue de Château and the escalier du Château to the Collegial Church and Neuchâtel Castle. From the top of the stairs, there's a marvellous view over the roof tops of the old town and accross the lake which, in itself, would make the effort worthwhile. 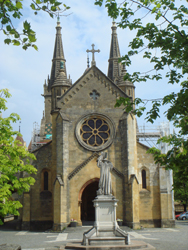 styles of architecture as this period was witness to the transition from one style to the other. The Church is built mainly in the sandstone found in the locality.

The evolution of the style of archicture during the 100 year construction is clear working backwards through the Apse and Choir (clearly Romanesque) to the three-aisle with pointed Gothic arches towards the main entrance.

The yellow colour of the sandstone, from which the church and the relaxing old town is constructed, is typical of Neuchâtel and is what Alexndre Dumas refered to when he described Neuchâtel as a "toytown carved from butter."

We headed back into the Old Town, with the intention of picking up a boat on the Neuchatel Lake - but misjudged the time and just missed the boat, so elected to enjoy a stroll on the promenade instead. 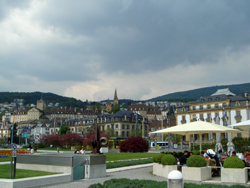 As we considered catching a slightly later boat to Biel/Bienne, the heavens opened and the rain came plummetting down by the lorry load. So we ran round the front of the building, which looked (from our original vantage point) like a museum, to discover that it was, in reality, the post office / tourist office. We took shelter from what became hail and pondered our options with an assortment of other people in varying states of wetness.

The map informed us that we were a short distance from the Museum of Art and History of Neuchâtel. Which was handy. So when the rain lightened up, after sporadic bouts of thunder and lightening, we headed on. 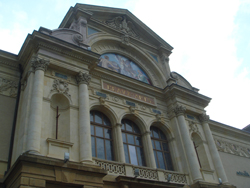 The stars of the permanent exhibition, however, are the automata by Pierre Jaquet-Droz and Henri-Louis Jaquet-Droz. These beautiful figures, comprising a musician, a scribe and a mathemetician actually do stuff. The musician, unlike other figures whose fingers merely follow the keys, actually presses the keys on her organ which has two bellows and 48 pipes. The musician wears a beautifully embroidered dress and I'm quite sure any girl whose proud of her dolls would be green with envy at the site of such a beautiful garment. I'm certainly impressed at the workmanship thats gone not only into her dress but the modelling of all three. The Scribe and Draughtsmen resembled each other, one holds a pen and the other a quill. The automata are all beautifully constructed with eerily realistic complextions, clothing and postures. The organ of the musician is beautifully encased in patterned woods. Demonstrations are only held once a month on the first Sunday of each month from 14:00 to 17:00. Even without a demo today, it's a marvel to see how well these things look even when stationery.