Brussels - a day around town by Mark Sukhija

As was planned we arrived in Brusells this morning with Swiss International Airlines at 10:30 - which was pleasingly on time.

We took the train into Brussels. Actually, I've got to stop and have a rant here. Getting a train ticket at Brussels airport for the trains is a ridiculous affair. You don't have to leave the building which is the good thing about it. BUT, when you do get to the ticket office, there are only two ticket machines - one of which no-one uses because they can't get to it on account of people queueing to talk to the ticket officers. The reason people are queuing for the ticket officers is because the machines do not accept either (a) credit cards of any kind or (b) cash. You can pay with Belgian-only debit cards. The machines are clearly labeled no credit-cards. There is NO label saying no cash. You can't find that out until you're at the front of the queue on account of the weight of people. And when you do find out, you have to join the end of another queue. Brussels is an international airport. I am not the only person, it appears, who arrives at Brussels airport without a Belgian debit card. While employing more staff may be good for massaging the unemployment figures it doesn't do anything for customer service. 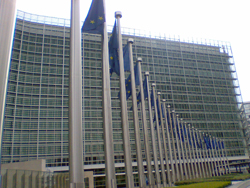 Ticketing aside, we found our way quickly and easily to the EU District of Brussels on the train to Gare Central and train to Schuman. Coming out of Schuman metro, we were presented with the monstrosity of the European Commission building of Berlaymont. This really is one of the ugliest buildings I've seen in a long time. It's in one of those strange curved four-winged shapeds. It was built in 1967 and had to be closed in 1991 when leaking asbestos was discovered. 1,400 tonnes of Asbestos had to be removed from the building. In my opinion, the building should have been removed along with the Asbestos.

Anyways, having identified the meeting place, I was off to the the Gare du Luxembourg so that we knew where we were going to catch our train this evening. Always good to know these things. The Gare du Luxembourg used to be the oldest train station in Belgium until it was torn town a few years back to make way for the European Paliament building. All that remains of the old Gare du Lexembourg is the façde of the building which, from the looks of it, is a real shame. The new Gare du Luxembourg is now further down the Rue de Treves and is still under construction - the Belgians have carefully concealed the entrance to station with various large crates to the extent that even the large "B" sign which one normally looks for is barely visible from the Place du Luxembourg. Which can cause a certain amount of confusion when theres nothing by way of any other sign posting.

So anyway, having found the very hidden train station it was time to have a little wander around the EU area. Which I can now confirm has being unduly boring, dull and a scar on the underbelly of time wasted designing shit. The EU Parliament building, while modern and somewhat attractive, is only in use a few weeks of the year. I have an interest in politics and have visited various parliaments in various places around the world and would have rather enjoyed taking a look round. In what I can only describe as being stupendously ignorant every information centre I was able to find (including one behind the façade of the former Gare de Luxembourg) was closed. Perhaps I'm asking too much but nearly every tourist information centre in the rest of the world is open on a Saturday - and I don't view information centres of the European Union any differently. Actually, given the increasing sceptism about the European Union in general, the rejection of the Constituional Treaty and the current debate surrounding the Lisbon treaty, I would have thought that the European Union would have provided itself with an oppurtunity to "educate" us about it's workings. To many of us, the workings of our own parliaments are opaque enough and many are visitable whether they are sitting or not. The severe opaqueness of the EU's central gevernment and discontent with it mean it needs to do a lot more work - most especially when citizens of it's member countries have come to it. Opening the visitor centres on weekends and giving free guided tours would be an excellent start. 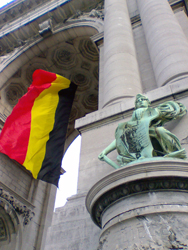 Having decided that the European Union was closed (and would probably remain that way for some way) I wandered off to Parc du Cinquantenaire which borders the extremly ugly EU area at the end of Rue de la Loi and Rue Belliard and the Arcade du Cinquantenaire at the other. The arcade is impressive enough and construction was commenced under the reign of Leopold II as a triumphal arch. The arch itself is quite impressive and is, apparently, the widest trimphal arch in the world. Construction was commenced in 1880 to commerate the 50th anniversary of Belgian independance but was only completed in 1905 - just in time for the 75th anniversary. During it's time, the Arch caused some tension between King Leopold II and the Government of the day over the costs of construction. Today the buildings of the Cinquantenaire house the Royal Museums for Art and History, the Royal Army and Military History Museum and the Autoworld museum.

Having found where we leave from and spent a bit of time doing down the generally poor quality of the EU buildings, it was time to grab myself a coffee at Kitty O'Sheas Irish pub. Kitty O'Sheas did have the 6 nations England/Ireland match on and seemed to have a good mix of fans and a healthy rivally between them. The first half over, it was off to pick up my partner and head down to Luxembourg which was a generally seamless 2 ¾ hour event.

What to see, where to stay and eat in historic Antwerp