Lhasa - a visit to the Jokhang Temple by Mark Sukhija 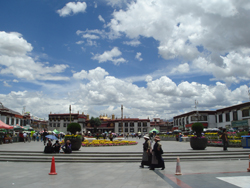 After a somewhat unsettled nights sleep at high altitude, we set out for the Jokhang Temple in central Lhasa. There was a visible security presence on the streets of Lhasa - presumably related to the 50th anniversary of the Dalai Lama heading into exile in India and last years troubles. It's been a long time seen since I've seen security on this scale before - I don't even recollect the army being on the streets of communist Czechoslovakia in the late '80s. 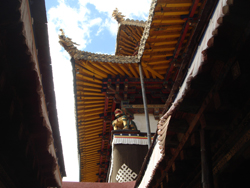 Detail of the roofing running around the Jokhang Temple 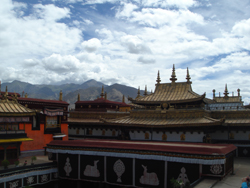 Gilded rooftops of the Jokhang Temple 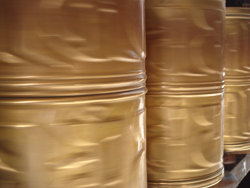 Prayer wheels along an aisle way inside the Jokhang Temple

We approached the Jokhang Temple through Barkhor Square and the surrounding market place. We paused in the square while our guide provided us with the a brief history of the temple from its construction in the 7th Century by King Songsten Gampo. Standing four stories high with guilded roofs - the Jokhang Temple, still one of the major places of pilgramage in Tibetan Buddhism, is a mightily impressive sight.

As we approached the Temple, getting also closer to the market, the pilgrims making the popular devotional circumabulation were in abundance. Making their slow wat around the temple through the market areas the pilgrims prostrate themselves.

Inside the temple, the distinctive odour of Yak butter permeating the air, pilgrims quietly queued as they ambulated through the various chapels of the temple. Statues of the Buddha adorn the chapels - each of which the pilgrims visit. The walls are exhaustivly decorated with stories of Shakyamuni and the stories of Buddhism. 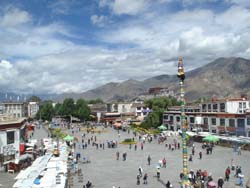 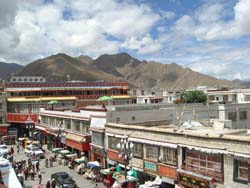 It seems somehow inappropriate to talk of the "ambience" of a temple, or any religous monument, but the silence, shuffling feet, the scent of Yak butter candles and subdued light surrounded by idols of Buddha and walls adorned with stories is the clearest sign of devotion of the local people to Buddha and Buddhism. Each pilgrim waited patiently for his or her turn, quietly and with complaint for their "turn" in the chapel. Yak butter was added to each candle and donations willingly given.

I don't know much about Buddhist art or architecture - but I was very firmly impressed with the level of workmanship in the Jokhang temple. Wall-paintings and scultpures adorned the temple throughout. I did do some reading about this - but some of the stories are still lost on me in a way they wouldn't have been in in a Christian church. Perhaps I should have read more about Tibetan art as well? Either way, I was impressed. A temple being used for what it's supposed to be used for! Not something that can be said for many of the churches in Rome

Outside the actual holy ground of temple, within the complex, a different, but still reverant feel, permeated the place. We ascended to the first floor and onto the roof - which provided and excellent close up view of the highly decorated and gilded roof tops. Views over the market area of Borkhar with the majestic Himalayan mountains in the background are, simply, wonderful.

A Singapore Airlines A380 aircraft parked up at Singapore Changi Airport