Visit to Chongqing by Mark Sukhija 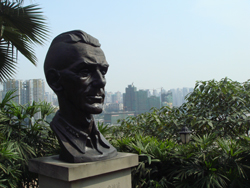 We only had a morning in Chongqing as we arrived early evening yesterday and are boarding our ship, the President 6, this afternoon. But we did manage a visit to the Stilwell Museum and the Flying Moths Museum. The former residence of General Stillwell was reopened in 1991 and now provides an excellent photographic exhibition of the times that General Stilwell spent in China dating from 1911 and, later, his involvement with the China / Burma / India theatre during the Second World War.

Our only other stop in Chongqing other than the Stilwell Museum was the Market Place in the old town of Ciqikou. While the market is somewhat touristic, there still remain many original Ming dynasty buildings and a good selection of food offerings to sample.