Zürich - a brief history of Grossmünster by Mark Sukhija 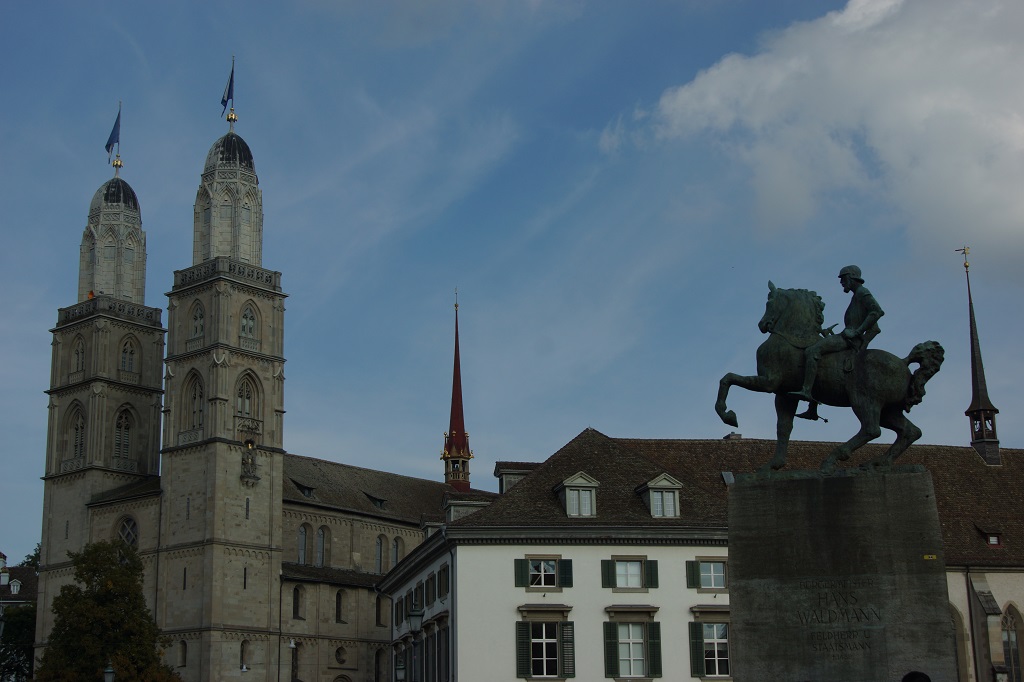 The Romanesque Grossmünster with it's distinctive twin towers is the principal parish church of Zürich and the starting point of the Reformation in Zürich under the guidance of Zwingli and Bullinger. Construction of Grossmünster commenced in 1100 and was completed around 100 years later.

The twin towers of the Grossmünster are probably the most recognized landmark in Zürich The church was constructed in the Romanesque style. Medieval columns with grotesques adorning the capitals withing a carved portal are typical of the Romanesque style of architecture and on display at the Grossmünster The crypt dates to the 11th and 13th centuries. The wooden steeples of the two towers (erected 1487 to 1492) were destroyed by fire in 1781 and replaced by the present neo-Gothic tops. Otto Munch added the bronze doors in the north and south portals in 1935 and 1950.

The stained glass windows in the choir are by Augusto Giacometti and date from 1933. The images depict a Christmas scene. Unusually for a reformed church, Mary is the dominate figure in the images with the infant Jesus significantly smaller. The pulpit dates from 1853. The Christening font dates from 1598 and also serves as the communion table.

Felix and Regula are said to have been members of the Thebaic Legion which had been massacred in Canton Valais at the end of the 3rd Century as a result of it's Christian beliefs. Felix and Regula fled to Zürich where they were subsequently executed. According to the legend, they picked up their decapitated heads and walked 40 paces to the place where they wished to be buried. Later, Charlemagne, on a hunting expedition, pursued a stag from Aachen (in Germany) to Zürich At the graves of Regula and Felix, Charlemagne''s horse stumbled and so Charlemagne decided to found a church which would later become Grossmünster at this site.

The crypt of Grossmünster is the oldest part of the Church. The poorly preserved wall paintings date from around 1500 and relate to the suffering of the Thebaic Legion and Felix and Regula. The monumental figure of Charlemagne was originally placed high up on the southern tower of Grossmünster but was brought into the crypt to protect him from the weather and replaced with a copy outside. The original dates from the 15th Century.

Grossmünster and the Reformation 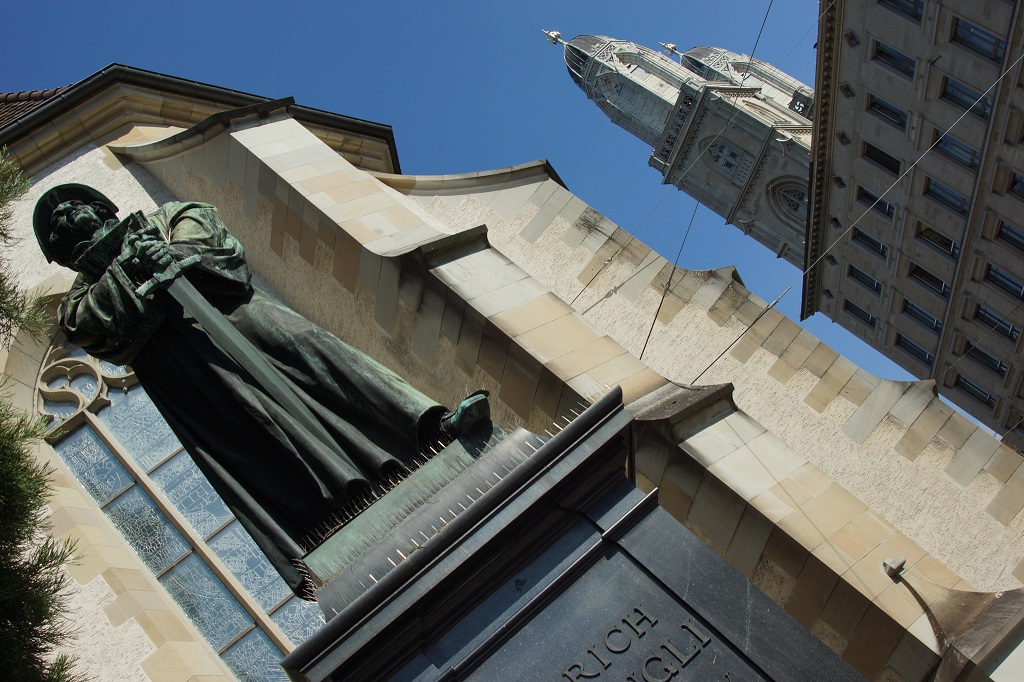 The sobriety of the Grossmünster interior is a consequence of Zwinglis' reforms of 1519. Anything worldly or which was not sanctioned by the Bible was removed and destroyed. Pictures, alters, sculptures and even the organ were removed. The present organ in Grossmünster dates from 1960 - the original having been destroyed in 1524. The reforms of Zwingli were to usher in a period during which intensive study of scripture was to be the focus of the religious community. Intensive study of the Scripture and reform were necessary if one was to live according to the Gospels.

During the first disputation in 1523, Zwingli established that it was the duty of the government to control public worship and religous observances and that only preaching compatible with the Bible was to be tolerated. During the Reformation period, Grossmünster remained at the centre of events in Switzerland. Decorations from the church were destroyed in an Iconoclasm and the church is, without a doubt, "physically" poorer for this "reform."

After Zwinglis death, Heinrich Bullinger was elected pastor of Grossmünster In contrast to the impulsive Zwingli, Bullinger was more prudent. Like Zwingli, Bullinger believed that the Church was not a hierachical orgnaisation but a meeting place for equals to worship God. In 1555, under Bullingers influence, persecuted Reformed Christians from Ticino were allowed into Zürich

Zürich - 9 great things to do 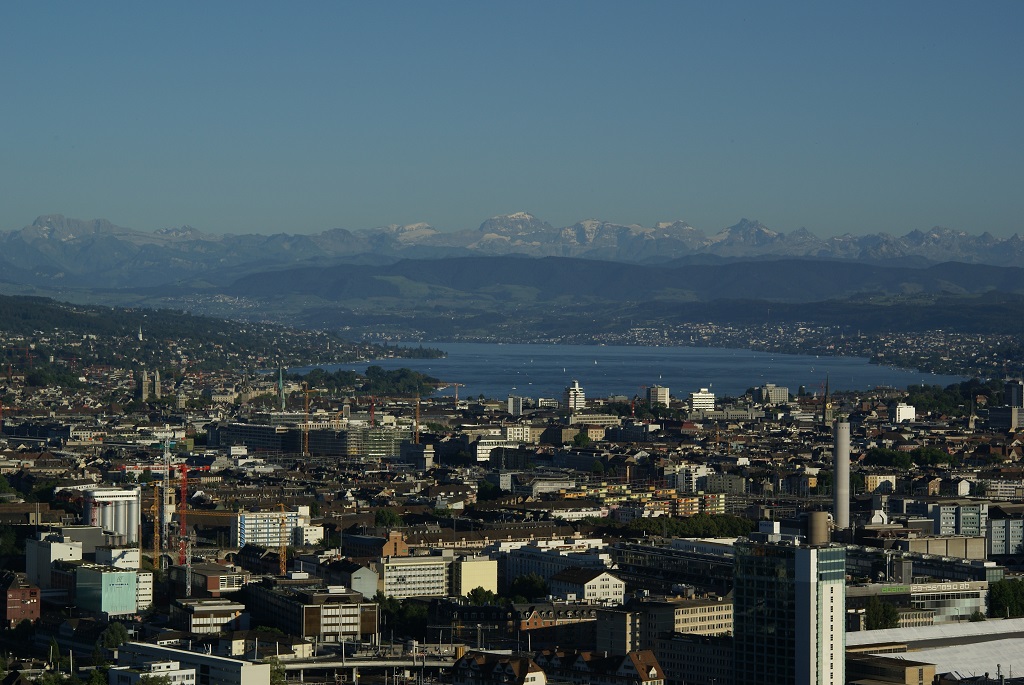 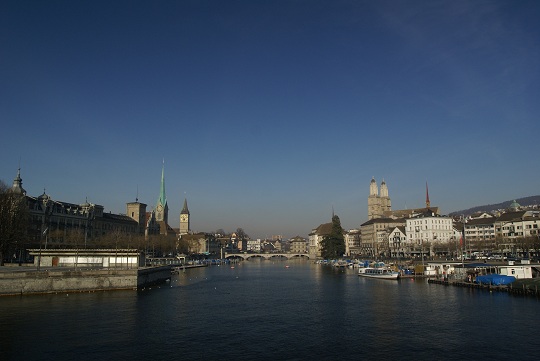 Skyline of Zürich seen from Quaibrücke including the spires of Grossmünster, Fraumünster and St Peters
Zürich - Grossmünster at sunset 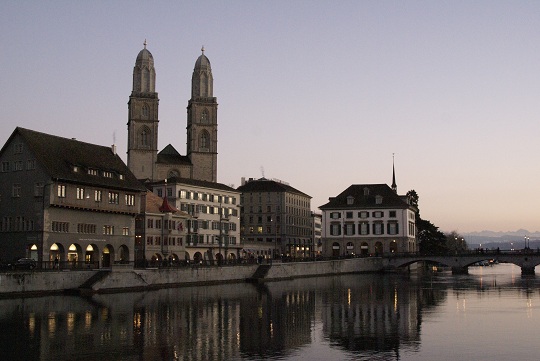 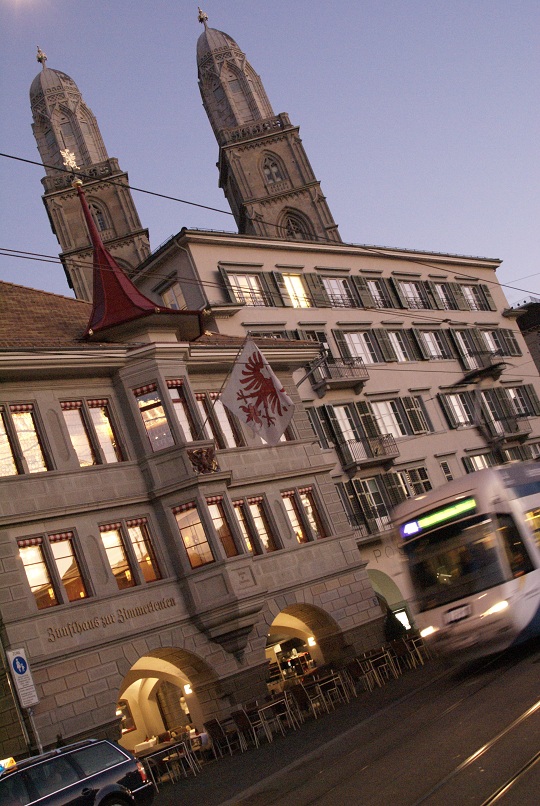 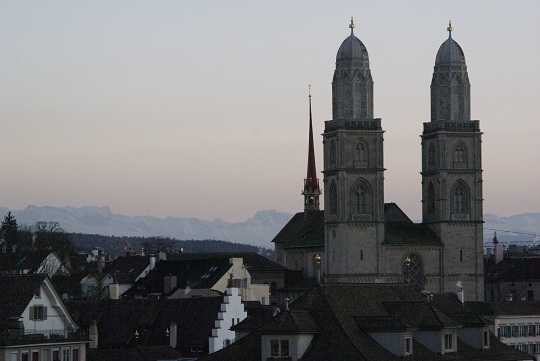 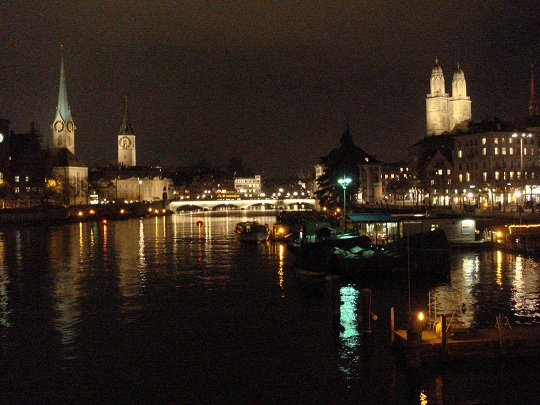 Zürich by night showing the spires of Fraumünster, Grossmünster and St Peters
Zürich - Shopping in the Niederdorf 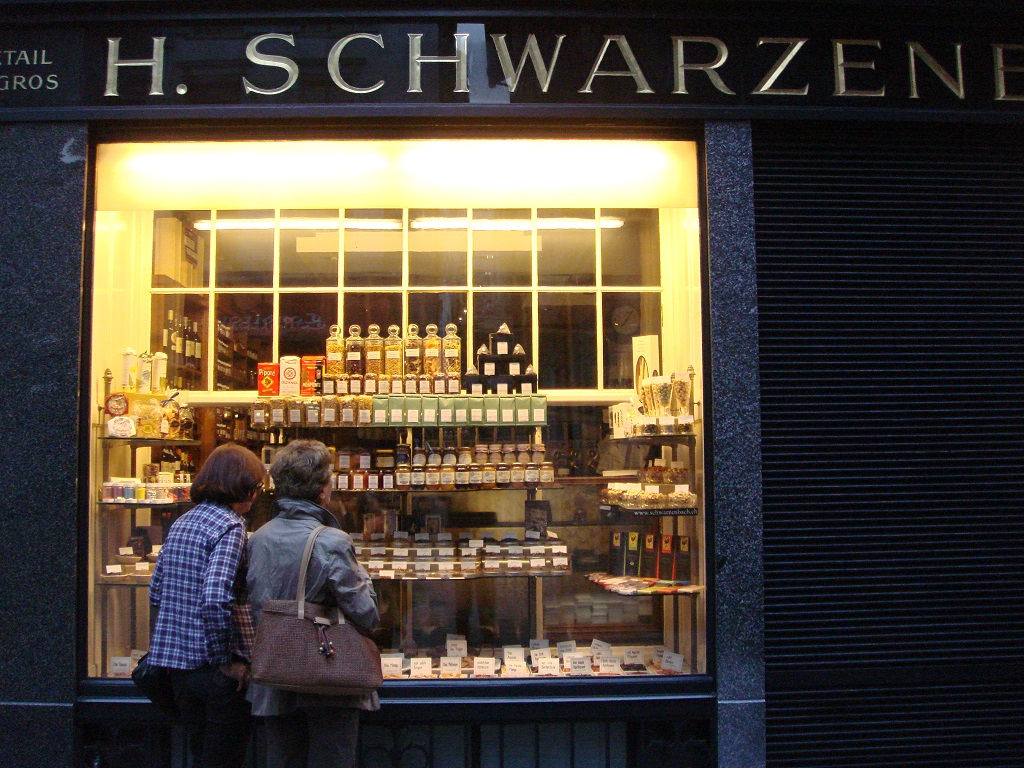 Zürich - Zürich skyline - Skyline of Zürich seen from Quaibrücke including the spires of Grossmünster, Fraumünster and St Peters