China - highlights from an 18 day trip by Mark Sukhija 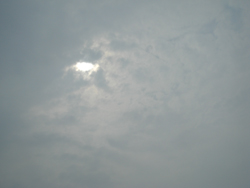 Our enjoyable 18 day trip through Chengdu, Lhasa, Chongqing, Yichang, Hangzhou, Suzhou and Shanghai was centred around the total solar eclipse - which will be longest of our lifetime. These are some of the highlights of our trip to China.

Sadly, the Total Solar Eclipse on the banks of the Qiantang River itself was a complete cloud out - we didn't even manage to see any of the partial phases - it was the darkest eclipse I've seen by a long shot. Eclipse Totality with total cloud cover is a hugely dark, eerie experience. It's always disappointing not to see totality - but if you goto enough eclipses, it'll happen eventually. We did, however, see the magnificent Tidal Bore 85 minutes after the eclipse. Hopefully things will be better in Queensland 2012. 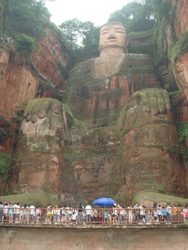 The Wenshu Temple in Chengdu was one of the unexpected highlights of the trip. My impression of Chengdu is a place which is not highly touristed by westerners and, as a result, at times we seemed to be the only westerners around. Which left us with the impression that we were visiting a little bit of real China. Which was nice.

The Giant Buddha at Leshan was, without a shadow of a doubt, worth every second of the 2.5 hour drive from Chengdu. Standing, or should that be sitting, at 71 meters in height the Giant Buddha is the largest Buddha in the world. Climbing down the steps, with carvings along the cliff walls, surrounded by pilgrims and other (local) tourists to discover yourself dominated by Buddhas feet and peering up to the sky is an experience. 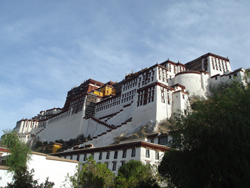 In spite of the very noticable security presence and the effects of altitude in Lhasa, we did visit the Jokhang Temple and thte Potala Palace. Both of which are very much worthwhile to visit. The Potala Palace, one time seat of the Tibetan Government, dates from the 17th in its current tri-colour form. The Red Palace was home to the religous part of the government while the White Palace was for political affairs. My only regret is that you're only permitted one hour visit to the interior. While I appreciate that this is a hugely popular place for pilgrims and the Tibetan community, I also believe reducing the visitor cap would allow those who do visit longer to appreciate the significance of the place. 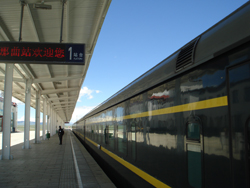 We took the train out of Lhasa to Lanzhou. From Lhasa at 3,700 meters and ascended, past beaded rivers, Yak and planted rape, onto the plateau reaching altitudes of over 5,000 meters above sea level. The scenery is vast and vastly impressive. We past one train station at 4,832 meters above sea level before we slept on our 28 hour train ride. The train takes 2 days and reachs over 5,000 meters en route to Beijing. We, however, disembarked at Lanzhou to fly to Chonqing and our cruise. Comfort isn't exactly SBB First Class - but nor is the altitude. 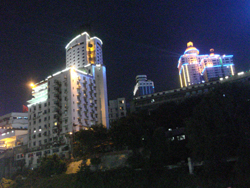 After visiting the Stillwell Museum in Chonqing, we took a three night cruise down the Yangtze River to Yichan. With the landscape already visibly changing as a result of the Three Gorges Dam, one of the highlights of the trip was the Shennong Stream Boat Tour which will soon no longer be possible as the area is flooded.

At Yichang, having disembarked our ship, we visited The Three Gorges Dam which is one of the most impressive engineering projects I've ever seen. Across the Yangtze River, the Dam contains 32 generators each one providing 700MW of electricity making it the largest electricity generating plant of any kind in the world. At 2,335 meters in length, 101 meters in height and 115 meters wide at the base the Dam is not only hugely massive but is also having major environmental impact on the Yangtze River environment and millions of people have had to be relocated to allow its construction. 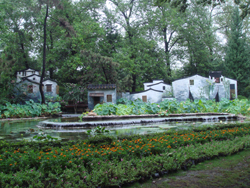 The Humble Administrators Garden in Suzhou is one of the finest gardens I've been to. To be frank, I'm not much of a garden person but know a good one when I see it. And this is one. It's well laid out and comprised of several individual set pieces, each one themed, a variety of once-functional buildings and a Bonsai garden with plants hundreds of years old.