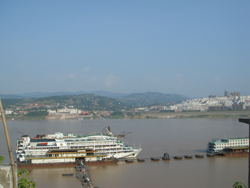 The President 6 docked for a shore excursion

Aboard the good ship President 6. We spent three days aboard ship down the Yangtze River on the good ship President 6 - a romantic name I know! The days going down the Yangtze were a relaxing way to spend some time not really doing very much. The excursions were a bit of a mixed bag - with Shennong Stream Boat Tour really standing out as something we'll never be able to again to Fengdu - a "Leicester Square Experience" on the Yangtze. 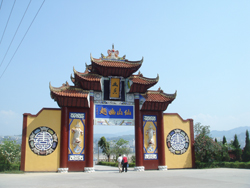 Gate at the entrance to Fengdu

Our short trip to Fengdu can only described as a trip on "The Great Conveyor Belt Of Tourism" and, for the most part, a complete sham. Largely destroyed during the Cultural Revolution, what is here is a class in Restoration - rather than preservation or conservation (as with the ancient city in Rome ) Our guide was very cagey not only about the effects of the Cultural Revolution on the site but what was original, what had been replaced, what was restored and whether the site had been relocated as a result of The Three Gorges Dam Project (of which she, like others, was suitably proud) Armed with such little cultural / historical information and being herded into shops at the behest of our guide did little to satisfy. I'm not a historian, but I'm not a f***ing idiot walking wallet either. A complete "Leicester Square Experience" on the Yangtze. Our guide was also confused as to whether Fengdu had been relocated as a result of the The Three Gorges Dam Project or not. Not impressed by this shopping extravaganza. 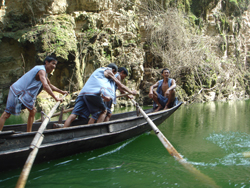 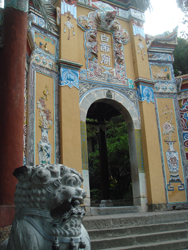 We disembarked at Yichang having gone through the locks of The Three Gorges Dam itself and spent the morning visiting the dam itself. The shoip elevator is still under construction, although the main dam itself has been completed and the area is now being flooded. With 32 generators producing 700MW each, the Three Gorges Dam is the largest electricity generating appliance anywhere in the world and also provides flood protection. The environmental impact, however, has not gone unnoticed or been uncontroversial.